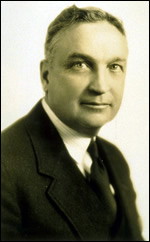 As a Colonial Revival designer, Gillette did not aim for archaeologically authentic designs. Instead, he sought innovative interpretations of the spirit of 18th century Georgian landscapes and designers in both colonial America and England. Hallmarks of Gillette’s designs include:  As you stroll through the Amstel House Garden, look for these hallmarks of Gillette’s Colonial Revival designs.

Gillette was trained by Warren Manning in Boston. Manning, in turn, was a student of Fredrick Law Olmstead during Olmsted's creation of New York’s Central Park. Gillette designed over 780 gardens in the early to mid-20th century, the vast majority in Virginia. The Amstel House garden was one of just five Gillette designs in Delaware; others included the Nemours Foundation and Old Swedes Church.

Gillette was a leader of both Colonial Revival and Country Place landscape design. The Country Place movement aimed to create grand, beautiful gardens and dramatic vistas for large country estates by melding classical motifs from Europe with elegant Beaux Arts design principles and the character and spirit of the place being landscaped.