History of Arasapha
​and the Amstel and Dutch House Gardens 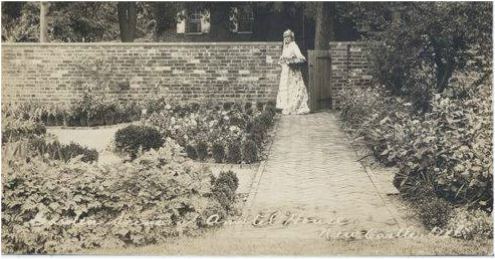 1931: At a card party in Historic New Castle, Mrs. Caleb Layton, President of Brandywine Garden Club, was asked if her club might consider cleaning up and replanting the Amstel House garden.  Brandywine Garden Club agreed to undertake this as its main project. Little did they know how complex and expensive it would become! When they first visited Amstel House, they were dismayed to find the garden filled not only with trash and weeds but also two shabby "sheds"--one a former bowling alley with a concrete slab floor that needed to be removed and replaced with soil. A Victorian-era porch on the back of the house needed to be torn down.

A "New Castle Committee," sometimes referred to as "the New Castle Ladies," was formed to support the project. Several of its members would become founding members of Arasapha.

1932: Brandywine Garden Club researched colonial gardens and initially considered installing a Dutch garden at Amstel House because of the Dutch heritage of Nicholas Van Dyke, a Delaware governor who lived there in the late 1700s. But they eventually hired Charles Gillette, a Virginia landscape architect, who drew up elaborate Colonial Revival garden plans for Amstel House. Gillette supervised the work of installing the most of the walls around the garden, the parterre, and some of the grounds behind the parterre. Brandywine Garden Club also reconstructed the kitchen's distinctive "squirrel tail" oven. The rest of the garden, including the garden house and the wall along Delaware Street, could not be installed because those grounds were still occupied by the two "sheds" housing a cobbler and the water commission.

1933: In December, Brandywine Garden Club amalgamated with Wilmington Garden Club, which continued the project under the chairmanship of Jean Kane Foulke duPont, a noted philanthropist. 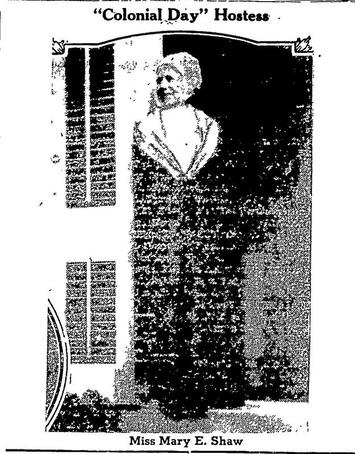 Miss Mary Shaw in a 1941 newspaper article
1934: Arasapha was founded by Miss Mary E. Shaw, a lifelong resident of Historic New Castle, along with Harriett Cavenaugh (Mrs. H. G. Cavenaugh) and Anne Janvier (Mrs. Francis deH. Janvier), at a meeting of 27 members in the Amstel House on January 25. Records of this meeting are lost, so we don't know why the name Arasapha was chosen (click here to learn what it might mean). Mrs. Cavenaugh and Mrs. Janvier were also two of the founders of Historic New Castle's A Day in Old New Castle in 1924. Miss Shaw chaired Arasapha for its first eight years.

Club records from Arasapha's first decade are lost. The records we have are conflicting on whether or not Arasapha was founded to care for the Amstel House garden. At a 1945 club meeting, a member read an excerpt from the (now lost) minutes of the club's first meeting, stating that the club's founding objectives were (1) transforming of unsightly spots in and around our city, (2) to promote a deeper sense of civic pride among fellow townspeople, and (3) instill into the minds of our young people the preservation of plant life. In 1948 the club affirmed what it called the club's original purpose: the beautification and improvement of New Castle. Arasapha's first by-laws, published in 1951, say the club was founded "not merely for the purpose of giving pleasure to the members, but of improving the beauty of the town and instilling in others, especially the school children, the desire to make the town attractive." None of these documents suggest that the Amstel House garden was one of the club's founding purposes. And a 21st century club document states that a 1934 letter from Arasapha to the Trustees of New Castle Common (now lost) says the club "organized for the purpose of cleaning and beautifying the vacant lots and approaches to the city."

​​1934-1943: Again, club records from Arasapha's first decade are lost, but newspaper records from 1938-1943 and club minutes after 1943 suggest that the Wilmington Garden Club's view of Arasapha's purpose may have been wishful thinking. The club focused during this period on the three founding objectives stated at that 1945 club meeting. Among its many accomplishments: It planted and maintained over 400 trees throughout the city; cleared and landscaped a dump on Ferry Cut-Off; landscaped and maintained the triangular park on Chestnut Street between East 3rd and East 4th Streets ; and contributed funds toward the Battery Park playground. It sponsored an annual flower show for children, with prizes awarded for cut flowers and flower arrangements. The only known records of tending the Amstel House garden during this period is in a 1937 Wilmington Garden Club report on the Amstel House garden that noted, "The New Castle ladies are assuming more and more responsibility about the care of the place" and a 1938 newspaper note that "Since its presentation to the New Castle Historical Society (Amstel House) by the Wilmington Garden Club, one [Arasapha] member has had charge of taking care of the garden each month." 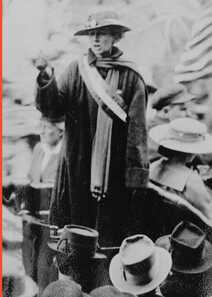 Florence Bayard Hilles speaking to a crowd circa 1916 (photo from the Library of Congress)
One of Arasapha's members during this period was Florence Bayard Hilles (Mrs. William S. Hilles). A prominent and active suffragette in the early 20th century, she was once arrested for blocking traffic while picketing the White House. She served three days of her 60-day sentence before receiving a presidential pardon. In the 1930s she served six years as national chair of the National Woman's Party. She was in her 70s when she was an Arasapha member. She raised lotus lilies and other plants at Ommelanden, her estate on River Road south of Historic New Castle, and hosted picnics for Arasapha members there.

​1938: With long-awaited removal of the cobbler's "shed" in the Amstel House garden in 1937, Wilmington Garden Club was finally able to construct a portion of the Delaware Street wall and the garden house, largely from salvaged materials, and complete the garden's brick walks. Its Amstel House garden project was now concluded at an estimated total cost of $5000--the equivalent of over $85,000 today. On May 2, at a ceremony at the Amstel House, Wilmington Garden Club handed over the key to the garden to New Castle Historical Society, owner of the property, again with the understanding that Arasapha would "tend" the garden, although Arasapha may not have fully assumed this responsibility for a number of years. The Wilmington Garden Club also handed over bricks and $200 to complete the Delaware Street wall whenever the water commission vacated its property.

​1939: The Delaware Society for the Preservation of Antiquities, which had purchased the Dutch House in 1937, hired Philadelphia landscape architect Robert Wheelwright of Wheelwright & Stevenson to design the Dutch House garden. The simple plan included a parterre flower garden to the left of the Dutch House; a brick terrace behind the Dutch House; and paths, garden beds, pear trees, and a fence around the perimeter of a grass lawn. We don't know which elements of the plan were installed in 1939, although we do know that Arasapha contributed an herb garden. The parterre, terrace, fences, and some of the brick paths are in the garden today; the parterre is now a kitchen garden. 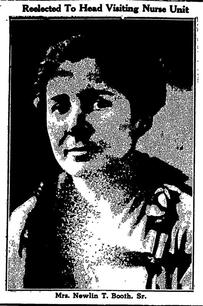 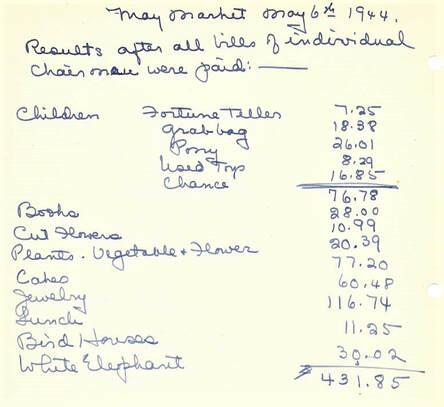 Report on Arasapha's first May Market, which featured pony rides, a fortune teller, and bird houses!
1944: At a club meeting, an Arasapha member "spoke of the work done by the Wilmington societies in putting in order the Dutch House and Amstel House gardens and how pleased their members will be that our club intends to take care of them." This is another indication that Arasapha did not focus on the Amstel House garden in its early years.

1946: The club began caring for the Dutch House gardens .

​Arasapha proposed to the City and the Trustees of New Castle Common the formation of a Tree Commission, which began meeting in 1947 and still meets today.

​Having grown from 27 to 110 members in just 14 years, Arasapha members voted to limit membership to 100 members and not to accept any more members until membership dropped below 100. Membership eventually declined even further, dropping to 86 members by 1965.

1948: Arasapha affirmed that it would use its funds "primarily for the beautification and improvement of New Castle in keeping with the original purpose of the club's founders." It established an executive committee, which eventually evolved into a board that continues to meet regularly today.

1951: Arasapha adopted its first bylaws. They stated that the club had a two-fold purpose: (1) the beautification and improvement of New Castle, with special emphasis on the Amstel House Garden, and (2) the stimulation of interest and knowledge in practical gardening among members. The bylaws described six standing committees that offer clues to the club's mid-century priorities: Membership, Program, Tea, Amstel House Garden, Dutch House Garden, and Triangle.

​1952: Arasapha asked Wilmington architect Victorine duPont Homsey to plan a rehabilitation of the Dutch House garden, which had been acquired by New Castle Historical Society. The project was funded by Arasapha, the Historical Society, and a short-term bank loan Arasapha took out in 1957. Work began in 1953 with new brick paths and a fence dividing the garden's middle and rear sections. Planting of the middle section was completed in 1954, the rear orchard in 1956, and the front knot garden in 1957. In 1955 financial responsibility for maintenance of the Amstel and Dutch House gardens was transfered to New Castle Historical Society, but Arasapha continued to offer interest, supervision, and financial support.

1963: Arasapha began its annual Holiday Greening project, which today decorates over 100 wreaths with all-natural materials that adorn the businesses and public buildings in the Historic District.

Arasapha also published updated bylaws in 1963, which expanded its 1951 purposes to include the Dutch House gardens and conservation of our natural resources.

The bylaws described six standing committees that offer clues to Arasapha's evolving priorities: Amstel House & Dutch House Gardens; Horticulture; Flower Arrangements and Flower Shows; Program; Community Projects; and Membership. The Amstel & Dutch House Gardens Committee was "charged with interest in the care and maintenance of these two gardens." The Horticultural Committee was to "foster the study of dirt gardening" and "promote the exchange of ideas and information on gardening among Club members." The Community Projects Committee was to "promote the beautification of the town," "cooperate with the authorities in projects for civic improvement," and "encourage gardening activity in the community, among children as well as adults."

1971: May Market moved from the front of the Court House and the Green to Market Square behind Town Hall, where it continues to this day.

​1980s: The former pear orchard in the rear of the Dutch House garden site was transformed into a perennial garden.

1988: Arasapha began offering an extensive selection of herbs at May Market, a tradition that continues today.

1993: Arasapha launched a raffle of a home-stitched quilt to boost funds raised at May Market. The quilt raffle was a feature of May Market for almost 30 years, through 2021.

2004: Arasapha Garden Club, Inc., was incorporated in the State of Delaware as a non-profit corporation.

2011: The space in the Dutch House garden that was once a pear orchard and then a perennial garden was transformed into a native plant garden.

2020: May Market  was cancelled for the first time since its inception in 1942 because of the COVID-19 pandemic.

2021: Arasapha turned maintenance of the Amstel and Dutch House gardens over to New Castle Historical Society and continues to support the gardens financially.