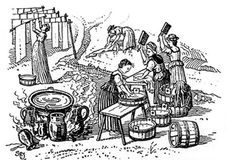 While we don’t know many specifics, we can be sure that the Amstel House and Dutch House grounds in the 1700s were very different from the beautiful, tranquil gardens they are today.

The backyards of pre-colonial and colonial homes, sometimes referred to as “kitchen yards,” were busy, noisy, dirty, and smelly, with little regard for their aesthetic appeal. They may have included:
The owner’s occupation and income level determined whether the grounds included a picturesque formal garden. The Dutch House probably did not have such a garden. The Amstel House may have had one, possibly surrounded by a fence, wall, or hedge. Future archaeological excavation may help us learn more about the many activities that once took place on these grounds.

For more information on gardens in the 1700s, see this article published by Old House Online.